Tulamben is a village that developed into a tourist attraction because it has a diverse marine potential.

Tulamben Marine Park is one of the attractions that makes Bali famous for its underwater tourism. Tulamben is a famous dive site because in addition to underwater scenery such as coral reef and fish, there are also sunken shipwrecks
(wreck points).


Located in the village of Tulamben, Kubu sub-district, in the northern part of Karangasem Regency about 25 km from Amlapura City - the district capital -, 37 km from Candidasa Beach tourism object, and about 82 km from Denpasar City.

Access to the location is easily reached because it is located on the edge of the highway in the direction of Amlapura - Singaraja, Buleleng. Tulamben was later developed into a tourism area that covers 2 sub-districts, namely Tulamben Village in Kubu District; Datah Village, Labasari Village, Culik Village, Purwakerti Village, and Bunutan Village in Abang District.


Tulamben's main attraction is the exotic potential of the underwater world for diving and snorkeling activities because of the clear water conditions throughout the year and the calm currents. At a depth of 30 meters under the sea there is a skeleton of the ship "Liberty", a US merchant ship that sank due to being hit by a Japanese submarine torpedo on 11 January 1942 while on its voyage across the Lombok Strait. 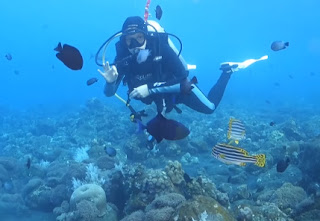 Diving in the depths of the Liberty wreck is the best reason for divers who come to Tulamben. It is estimated that there are around 400 species of reef fish inhabiting the shipwreck and visited by around 100 species of pelagic fish.

This place is also called a paradise reef because it is full of surprise sea animals that appear, such as eel ribbon, mimic octopus, boxer crabs, ghost pipefish, seahorse, leaf fish, garden eels, lion fish, harlequin shrimp, and other unusual types found here. While a large collection of jack fish that number up to hundreds of tails always enliven this shipwreck and they are very friendly to divers.

How very interesting is Tulamben Tourism Object which is one of the interesting tourist attractions in Bali?

Thank's for your trust and hopefully more fun