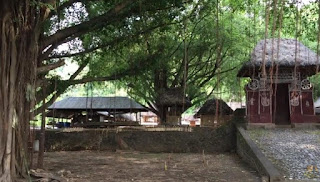 The village of Julah is a village that has a population of Bali Mula, where until now all of its citizens in carrying out religious rituals use very simple ritual facilities.


The simplicity that is used is not solely because in Julah village it is difficult to find ritual facilities such as those used by Balinese Hindus in general,


but because people in this village do not dare to change and are very obedient to inherit the traditions of their ancestors which are considered to contain supernatural powers natural.

Julah Village is an old village in Bali located in Tejakula Buleleng Regency.

From the layout of the village, this village resembles other ancient villages in Bali such as Tenganan Village in Karangasem Regency.

This village is known as a sacred village and still has traditional house buildings and their temp;e which is believed to be the oldest temple in Bali, and also has handicrafts with distinctive characteristics.

Thank's for your trust and hopefully more fun